How Your Vehicle’s Airbags Work

Safety technology in our vehicles has come a long way. When you get in a car crash, you are protected by a number of mechanisms including your seatbelt, frame of your vehicle, and airbags. Airbags save thousands of lives in collisions every year. They work in tandem with your seatbelt to provide protection during a car crash.

How Do Airbags Help?

When you are traveling in your vehicle, your body has the same momentum as the vehicle. That means that when the vehicle stops, it does not necessarily mean that your momentum stops with it. You will keep moving forward at the same speed until something stops you. Way back when, the dashboard, or in some cases the windshield, would be what would stop you. However, nowadays, we have a little something called airbags which inflate rapidly to stop us. As you can imagine, moving forward into an inflated bag is a lot less troublesome than flying through the windshield. However, as mentioned above, they are to be used WITH seatbelts. The combination of the two provides the highest level of safety. Airbags on their own are actually quite dangerous.

How Do Airbags Work?

An airbag is employed when the car hits something and loses speed very quickly. A device inside your vehicle called an accelerometer detects this rapid change in speed and triggers a circuit. Only massive amounts of force and extremely rapid deceleration trigger this circuit (that’s why you don’t see your airbags going off every time you hit the brakes. This circuit actually ignites an explosive mechanism that fills a nylon bag with gas, which expands past the steering wheel cover (or dashboard cover if you’re in the passenger’s seat) in front of the driver. The driver is propelled into the bag rather than the steering wheel or dashboard and pushes against the bag. The bag then deflates nearly as rapidly as it inflated when the gas escapes through small holes in the lining. This cushioning protects the driver from coming into contact with hard surfaces during the crash, thus preventing several injuries, and in some cases, death.

TIRES: WHICH IS BEST FOR MY CAR?

HOW TO KNOW IF YOUR CAR NEEDS AN OIL CHANGE

10 TIPS TO GET YOUR CAR READY FOR WINTER

MY CHECK ENGINE LIGHT IS FLASHING, WHAT SHOULD I DO?

IS MY CAR BATTERY DEAD IF THE CAR WON’T START?

WHAT DOES IT MEAN IF MY CAR SHAKES WHILE IDLING?

WHY DOES MY ENGINE SQUEAL WHEN I TURN IT ON?

WHAT IS A HANGING BRAKE CALIPER? 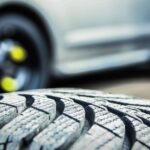 TIRES: WHICH IS BEST FOR MY CAR? 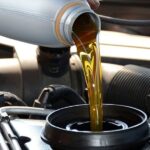 HOW TO KNOW IF YOUR CAR NEEDS AN OIL CHANGE 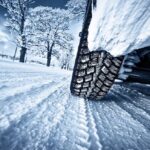 10 TIPS TO GET YOUR CAR READY FOR WINTER 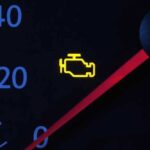 MY CHECK ENGINE LIGHT IS FLASHING, WHAT SHOULD I DO? 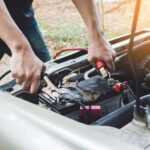 IS MY CAR BATTERY DEAD IF THE CAR WON’T START?